I am attracted to fundamental issues in biology, philosophy and artificial general intelligence (AGI). This focus has inspired me to become the architect of a new complexity theory, called ‘the operator theory’ (or OT) that is introduced in this website.

I studied plant pathology at Wageningen University (masters in 1986, Cum Laude), followed by two years of civil service (Institute for Soil Fertility, Haren, Groningen). After finishing my PhD in ecotoxicology (Wageningen University, 1993), I received a postdoc position at the Free University (Amsterdam). The core ideas of the operator theory stem from spring 1994. In 1996 our family moved to Denmark, where I worked on computer-simulations of pesticide side-effects (National Environmental Research Institute, NERI, Silkeborg). In 1999 we moved back to Wageningen where I became team leader of an ecology group at Alterra. A few years later I gave up my team leadership, to work more hours on the Operator theory and related topics. Support of Alterra resulted in my second PhD (Radboud University Nijmegen, 2010) and in the publishing of two books. Since 2013 I am involved in the AGI company Mind|Construct. In 2016 I coached students during their academic consultancy training (ACT).  My work at Alterra ended in 2017. In 1918 I studied philosophy of science (Wageningen University, 2018), which time resulted in the writing of the ”ScienceBites“.

Mission. My mission as a scientist is to contribute to a mechanistic bottom-up reconstruction of how the universe came to be, including the presence of humans on earth. Such a reconstruction is a model. This model is based on knowledge obtained from current systems. Such model and knowledge can also be used as a basis for predictions. To pursue my mission I follow two strategies:

Vision. It is my vision that ‘matter’ (as waves/particles) provides the basis for all scientific work. Other aspects can be derived from such material basis. How this can be imagined is shown in the below figure. Al the concepts in this figure relate to materially observable phenomena. 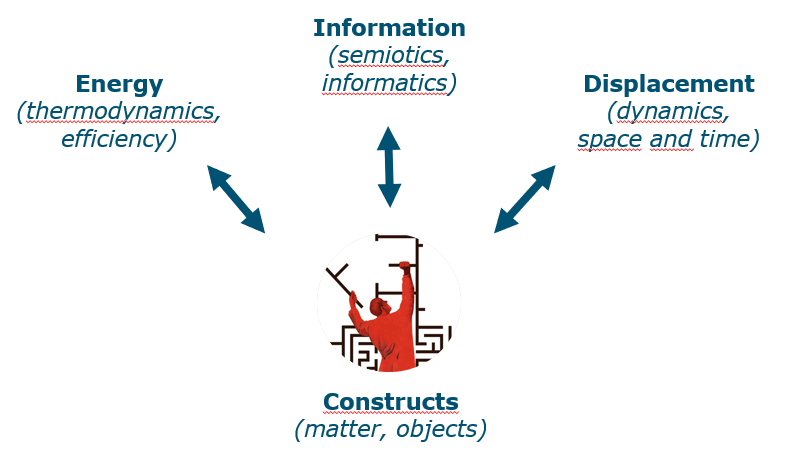 In several ways the OT has been the inspiration for cooperation. Bouwine Bergsma is writing a book about big history that uses the OT as a backbone. The book is for kids and their (grand) parents. The exciting illustrations are from the hand of Adriaan Bijloo. (To be published early 2019). Koert van Mensvoort currently writes a book about the future of humanity. One chapter uses the operator theory as inspiration (To be published early 2019). My friend, the artist Rudy Klomp refers to the OT in several of his paintings, e.g. ‘Same difference (2013)’, ‘Evolutie Involutie’ (2014), ‘Rudy Klomp ontmoet Gerard Jagers op Akkerhuis en Jaap van den Herik (2016)’ ‘Horus of De Soortenstorm (2018)’.

Personal interests: I am actively involved in modern art, music, and the design of furniture. I love to spend quality time with our family.

Additional information about the OT can be found here.